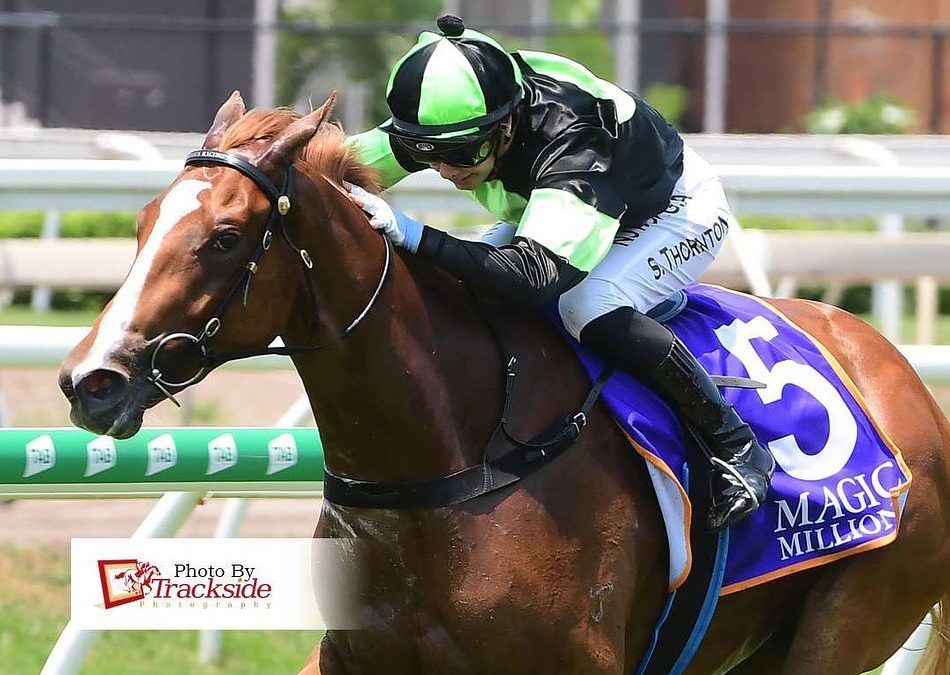 A determined Gotta Kiss with Steph Thornton won the first of the day at Eagle Farm in the @mmsnippets Basil Nolan Jr QTIS Two-year-old plate, and is now on the way to the Magic Millions! 🏆🏇🏼 #bneraces pic.twitter.com/zn9PglxYaA

Magic Millions was proud to sponsor the 2YO race at Eagle Farm today and name it in honour of our great friend Basil Nolan Jr. His parents Basil Sr and Di joined the female connections of the winner Gotta Kiss post race. pic.twitter.com/shMhl8LHGh

Steph Thornton is in the box seat to ride Gotta Kiss in next month’s Magic Millions Classic after steering the emerging filly to an impressive win in Saturday’s Basil Nolan Jr QTIS 2YO Plate (1000m) at Eagle Farm.

The daughter of Not A Single Doubt firmed into $9 with BetEasy for the $2 million two-year-old showpiece after getting the better of Lady Banff, Anders and The Drinks Cart, taking her record to two wins and a second from three career starts.

Trainer Steve O’Dea said Gotta Kiss would head straight to the Gold Coast without another run.

“It’s always been our plan to just go the three weeks straight into the Magic Millions which is obviously what we did with Candika a few years back when she ran third to Capitalist.

“She’s probably a similar filly in that she’s already looking for the 1200m now so I probably wouldn’t like to run her too many times and take the dash out of her legs.”